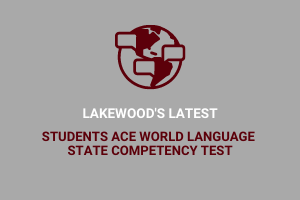 More than half the Lakewood students taking the recent World Language Competency Test earned the maximum number of credits offered giving them a big jump toward high school graduation. And some were middle schoolers! This reflects a high level of achievement in our secondary students.

This is the first year Lakewood students have taken part in this state program offered in at least 23 different languages. Thirteen Lakewood students in grades 6-12 took tests in Russian, Mandarin/Chinese and Spanish. Every child earned credit.

The state allows students who speak, read, and write in a language other than English to earn world language credits by demonstrating proficiency. Their test score earns 2 to 4 course credits. The test assesses their skills in their home and/or native language.

“I wanted to take the World Competency test because I felt confident enough in my Spanish speaking, reading, and writing skills. I am not the best, but I know enough,” said Yasmin Uribe, an 8th grader at Lakewood Middle School. “I volunteered to take it since I knew that it could give me high school credits.”

Uribe said she has not yet decided what she wants to pursue after high school. “I would like to have a good job in what I decide to study. I want to make sure I am financially stable,” she explained. That stability will help her attain another goal she has for her future — to give back to her family.

Lakewood High junior Alexander Martinez saw the test as a benefit in gaining college admission. Many colleges require at least 2 years of a world language for entering freshmen. Electrical Engineering is his career path. “I’ve always been interested in electricity,” Martinez explained. “When I was younger, I would take my broken toys apart to try to fix them. Sometimes I did and sometimes the toys were just more broken.”

“Those first few months back I was nervous,” he said about speaking English. “I was so worried I would try to say something, and it would turn out to mean something bad when I meant for it to be good.” He says his time in the English Language Learner class with LHS teacher Leslie O’Kinsella has helped him feel more comfortable. “It is so wonderful to have friends now. And I understand most of what people say to me and if I don’t, I know how to ask for help,” Martinez proudly said.

Denys Grymov experienced similar feelings when he arrived in the U.S. as a middle school student “I felt so embarrassed and confused,” he said. Russian is his family’s home language. Now a sophomore, his competency test credits earned on the Russian test has put him closer to achieving a high school diploma.  “I am happy to not have to take world language classes,” he said. He is interested in welding but is still figuring out how he will use that interest as a career.

“Earning these credits can really free up their high school schedule to try other things,” said Greg Alburn, the English Language Learner teacher at Lakewood Middle School. Initially, his students were a bit reluctant about taking the test. But after walking them through the online practice test, several of his students discovered they had more skills than they thought in their native language. “Seeing and celebrating the success of these first students is the best selling point for future test takers,” he said.

In accordance with RCW49.60, the Lakewood School District does not discriminate in employment and schools. The Lakewood School District provides Equal Educational and Employment Opportunity without regard to race, creed, color, national origin, sex, handicap/disability, sexual orientation including gender expression or identity, creed, religion, age, veteran or military status, use of a trained dog to guide or service animal by a person with a disability, and provides equal access to the Boy Scouts and designated youth groups. The district complies with all applicable state and federal laws and regulations to include, but not limited to, Title IX, Title VI of the Civil Rights Acts, Section 504 of the Rehabilitation Act, RCW 49.60 “The Law Against Discrimination,” and RCW 28A.640 “Sex Equity,” and covers, but is not limited to, all district programs, courses, activities, including extracurricular activities, services, access to facilities, etc. Inquiries regarding compliance procedures should be directed to Lakewood School District, 17110 16th Drive NE, Marysville, WA 98271, Attention: Title IX and Civil Rights Officer, Daniel Lee, 360-652-4500, dlee@lwsd.wednet.edu or ADA Compliance Officer and Section 504 Compliance Officer, Amie Verellen-Grubbs, 360-652-4500, averellen-grubbs@lwsd.wednet.edu.
Copyright © 2002-2021 Blackboard, Inc. All rights reserved.