Students are honoring veterans this week by writing letters to service members and veterans, learning patriotic songs, and learning more about the military with virtual assemblies in their classrooms.

At Cougar Creek Elementary School, students in Tiffany DeWitt’s fifth grade class watched a video honoring service members and their families. They had an opportunity to ask questions before writing thank you letters that will be sent to active military and veterans. Music teacher Kim Rawson also organized a video of patriotic student performances that students watched in their classrooms. 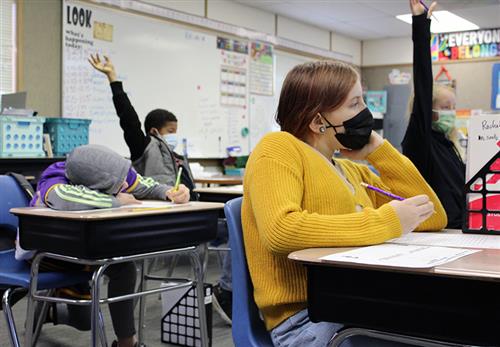 At English Crossing Elementary School, fifth graders created poppy art after reading the World War I poem, “In Flanders Field” by John McCrae. Each student painted one-quarter of a poppy. The quarters were joined together to create the full flower. 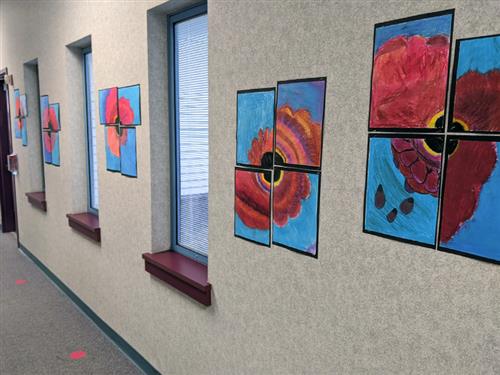 Some students also wrote letters for Operation Gratitude, which will be sent to veterans and active-duty military.

Music teacher Ethan Lane taught students at Lakewood Elementary and Cougar Creek Elementary the lyrics for the songs from each branch of the military. Students had a chance to clap and snap to songs such as “Anchors Aweigh” from the U.S. Navy. Kindergartners at LES also created a Veterans Day window display. 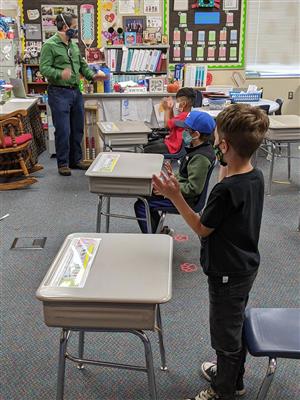 At Lakewood Middle School, eighth grade leadership students explained the different branches of the military and showed recorded performances of the band playing the “Star Spangled Banner” and the choir singing “Tribute to Armed Services.” Students also said the Pledge of Allegiance with video from the LHS American Sign Language class.

At Lakewood High School, student leadership compiled a virtual assembly for Friday. The students produced one video for each period along with a discussion question for each. They interviewed staff veterans to give their thoughts and concluded with a performance from the Swingbeat Jazz Choir.

In accordance with RCW49.60, the Lakewood School District does not discriminate in employment and schools. The Lakewood School District provides Equal Educational and Employment Opportunity without regard to race, creed, color, national origin, sex, handicap/disability, sexual orientation including gender expression or identity, creed, religion, age, veteran or military status, use of a trained dog to guide or service animal by a person with a disability, and provides equal access to the Boy Scouts and designated youth groups. The district complies with all applicable state and federal laws and regulations to include, but not limited to, Title IX, Title VI of the Civil Rights Acts, Section 504 of the Rehabilitation Act, RCW 49.60 “The Law Against Discrimination,” and RCW 28A.640 “Sex Equity,” and covers, but is not limited to, all district programs, courses, activities, including extracurricular activities, services, access to facilities, etc. Inquiries regarding compliance procedures should be directed to Lakewood School District, 17110 16th Drive NE, Marysville, WA 98271, Attention: Title IX and Civil Rights Officer, Daniel Lee, 360-652-4500, dlee@lwsd.wednet.edu or ADA Compliance Officer and Section 504 Compliance Officer, Amie Verellen-Grubbs, 360-652-4500, averellen-grubbs@lwsd.wednet.edu.
Copyright © 2002-2021 Blackboard, Inc. All rights reserved.