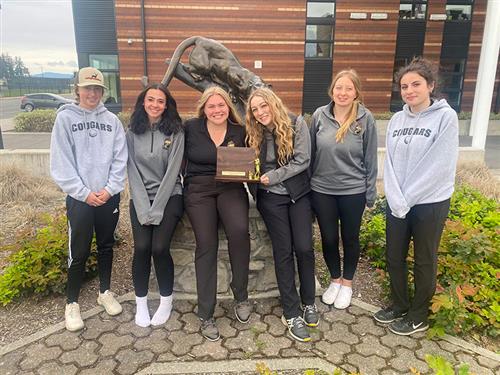 Kiana Schroeder and her sister Malia Schroeder led the Lakewood girls golf team to become 2022 Northwest Conference Champions! The Lakewood Cougars won their sixth conference match of the season with a score of 486.

All six players will compete in the District One 2A Tournament May 17-18 at Snohomish Golf Course, for a chance to win one of the 12 spots to the State Tournament at the end of May.

In accordance with RCW49.60, the Lakewood School District does not discriminate in employment and schools. The Lakewood School District provides Equal Educational and Employment Opportunity without regard to race, creed, color, national origin, sex, handicap/disability, sexual orientation including gender expression or identity, creed, religion, age, veteran or military status, use of a trained dog to guide or service animal by a person with a disability, and provides equal access to the Boy Scouts and designated youth groups. The district complies with all applicable state and federal laws and regulations to include, but not limited to, Title IX, Title VI of the Civil Rights Acts, Section 504 of the Rehabilitation Act, RCW 49.60 “The Law Against Discrimination,” and RCW 28A.640 “Sex Equity,” and covers, but is not limited to, all district programs, courses, activities, including extracurricular activities, services, access to facilities, etc. Inquiries regarding compliance procedures should be directed to Lakewood School District, 17110 16th Drive NE, Marysville, WA 98271, Attention: Title IX and Civil Rights Officer, Timothy Haines, 360-652-4500, thaines@lwsd.wednet.edu or ADA Compliance Officer and Section 504 Compliance Officer, Amie Verellen-Grubbs, 360-652-4500, averellen-grubbs@lwsd.wednet.edu.
Copyright © 2002-2022 Blackboard, Inc. All rights reserved.