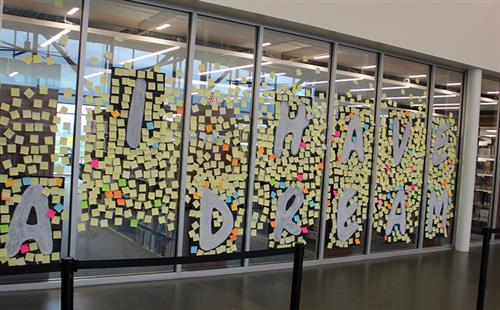 Dr. Martin Luther King Jr. wanted everyone to experience a sense of belonging. During virtual assemblies, speakers shared inspirational messages that encouraged students at LMS and LHS to use their talents to bring in others. 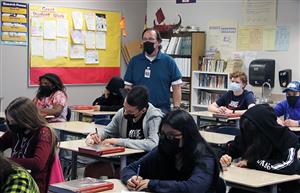 James Layman, from Association for Washington Student Leaders, challenged Lakewood Middle School students to be a light for others. He quoted from King, “Darkness cannot drive out darkness, only light can do that.” He encouraged students to: Listen. Listen more. Listen stronger.

In a video from educator Erin Jones, students at Lakewood High School considered the life and legacy of King through the lens of love, courage and sacrifice. Jones said that King was an advocate, not just for racial equality, but also for poor people and for anyone who was on the margins of society. He received the Nobel Peace Prize because he chose to demonstrate with nonviolence and sacrifice for his country. 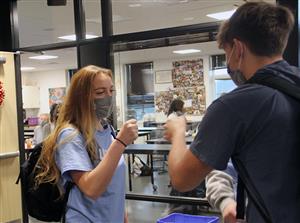 ASB President Jarron Ransford and other student leaders organized an “I Have a Dream” space on the library window for students to write their dreams for themselves and for their community.

Students also started “Project Smile” last week to foster a sense of belonging among students. They take turns giving fist bumps in the morning and between classes.

In her video, Jones encouraged students to think about the people on the margins of their communities. “Who is sleeping on couches? Who doesn’t have access to food? Who practices a different religion? Who doesn’t speak English?” She asked students to have the courage to call each other “into a better version of ourselves…. Make your community the best place it can be.” 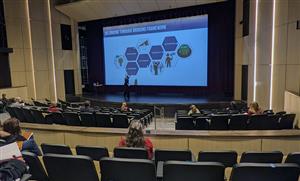 Teachers at Lakewood High School took time during their Friday early release on Jan. 14 to discuss belonging with Dr. Jennifer Wiley, founder of Developing Democracy Leadership and Organizational Development Consultants. Wiley spent time reviewing how the brain reacts to stress. “When people are not feeling belonging, they amygdala and can’t learn,” she said, referring to the part of the brain that regulates emotions. After the full-group discussion, teachers discussed in small groups with their departments what it takes to create a sense of belonging in their classrooms.

In accordance with RCW49.60, the Lakewood School District does not discriminate in employment and schools. The Lakewood School District provides Equal Educational and Employment Opportunity without regard to race, creed, color, national origin, sex, handicap/disability, sexual orientation including gender expression or identity, creed, religion, age, veteran or military status, use of a trained dog to guide or service animal by a person with a disability, and provides equal access to the Boy Scouts and designated youth groups. The district complies with all applicable state and federal laws and regulations to include, but not limited to, Title IX, Title VI of the Civil Rights Acts, Section 504 of the Rehabilitation Act, RCW 49.60 “The Law Against Discrimination,” and RCW 28A.640 “Sex Equity,” and covers, but is not limited to, all district programs, courses, activities, including extracurricular activities, services, access to facilities, etc. Inquiries regarding compliance procedures should be directed to Lakewood School District, 17110 16th Drive NE, Marysville, WA 98271, Attention: Title IX and Civil Rights Officer, Daniel Lee, 360-652-4500, dlee@lwsd.wednet.edu or ADA Compliance Officer and Section 504 Compliance Officer, Amie Verellen-Grubbs, 360-652-4500, averellen-grubbs@lwsd.wednet.edu.
Copyright © 2002-2022 Blackboard, Inc. All rights reserved.